If you love Calum Hood - bassist and singer of the Australian pop-rock band 5 Seconds of Summer, you'll love these top 50 exciting pieces!

Calum dropped out of high school.

His mother's name is Joy Hood, she is from New Zealand.

He has a sister named Mali Koa Hood, her Twitter is @malikoa.

Calum is half Kiwi and half Scottish.

He is annoyed when people assume that he is Chinese, but does not have anything against the Chinese.

Calum wrote the most 5SOS songs out of the boys.

Calum is also the one who influenced the rest of the boys starting to compose songs.

Calum's favorite song on the album is ‘Kiss Me Kiss Me’.

In the music video Don and Stop, Calum Hood's superhero name is Cal-Pal.

If Calum didn't stay for 5 Seconds of the summer, he would be a soccer player. 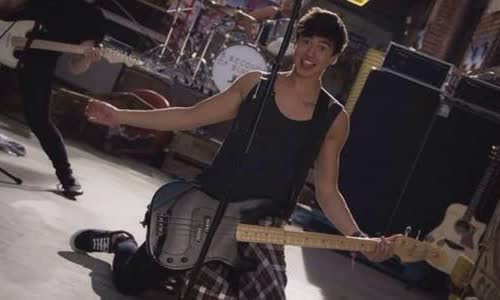 Calum came to Brazil in 2012 because he was chosen to represent Australia in football;

His favorite albums are Nickelback's or Dragonforce's.

The 5SOS boys said that Calum has the best body in the group.

According to Ashton, Calum has the best butt in the group.

The boys say that Calum is the most feminine, since he doesn't have a lot of leg hair.

Calum has a tattoo on his chest with the inscription MMXII, short for 2012 in Roman Numerals;

He also has a feather tattoo on his collarbone and a bird on his arm.

Calum Hood had her first kiss at the age of 13.

Calum said if there was someone he liked stuck in the elevator, he would want it to be Katy Perry.

He wanted to meet Chris Brown and even had a #chrisbrownmeetcalum trend on twitter in hopes of catching the R&B star's attention.

His favorite color is blue.

His relationship with Maddie lasted only about three months.

Calum's favorite food is a Hawaiian pizza - topped with ham and pineapple.

He likes to drink tea.

Calum doesn't like the salt and vinegar on his fries.

He prefers dogs to cats.

Calum is known to be quite a prankster in 5 Seconds Summer.

Calum, Michael & Luke all played a set without pants, in front of a crowd of drunken people in their lobby in London.

Calum celebrated his 18th birthday in London, England while supporting One Direction's Take Me Home tour.

While celebrating his 18th birthday, he must present his identification at the door of the London club Mahiki to prove his age before 5SOS is allowed in.

During One Direction's Take Me Home tour in LA, Calum had his pants torn in front of fifteen thousand people, the guitar tech guy, Nigel, had to tape his pants!